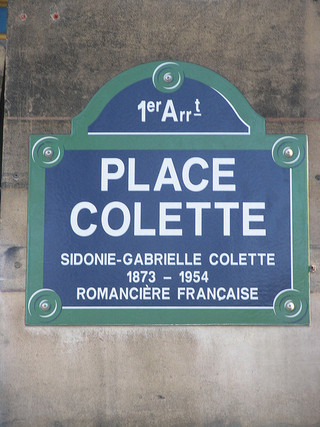 Colette on the Right Bank 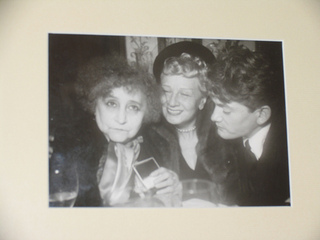 A photo of Colette at the Paris restaurant Le Grand Vefour 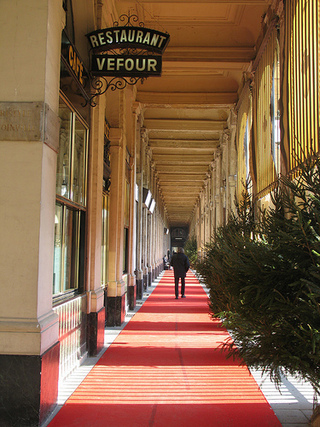 A frizzy-haired old woman wearing sandals used to sit on a stoop at the Palais-Royal in Paris. If people took her for a tramp what did she care? Her extraordinary life was almost over. Now she could spend her afternoons eyeing passersby and cooing to stray cats.

Her ghost still haunts the quiet northern arcade of the Palais-Royal. Only now there's a plaque to identify her: Colette, the extraordinary French writer who spent her last years at the edge of this garden. It doesn't list dates; vain to the last, she wouldn't have liked that. When she died at age 81 in 1954, she received a state funeral in the palace's cour d'honneur. Her coffin, surrounded by wreaths, lay under a French tricolor, and thousands came to pay their respects.

Colette has gone in and out of style, but by any measure, she was a great writer, the author of 80 books, including novels about the insouciant teenage girl Claudine that became French bestsellers, inspiring two plays, a shirt collar, perfume, candy and cigarettes. Ten of her works have been made into films, most recently Chéri, with Michelle Pfeiffer in 2009, most famously the musical Gigi in 1958.

And then there was Colette, the woman, whose life arced across one of the most fascinating periods in French history, from the ebullient belle époque to the German Occupation and slightly beyond. For half a century, she scandalized Paris, lopping off her long schoolgirl braid and varnishing her toenails, gallivanting around town in an apparent ménage à trois with her husband and his girlfriend, cross-dressing for her lesbian lover, baring her breast onstage, divorcing, remarrying and seducing her teenage stepson.

Whenever she hit rock bottom, Colette remade herself, resulting in a resumé that reads like the Yellow Pages: journalist, critic, pornographer, music hall performer, lecturer, screenwriter, advice columnist, beautician (though her aging looks were no advertisement for her skills).

A naturally liberated woman, Colette despised feminists. She ate gluttonously and got fat; loved animals but monstrously ignored her only daughter; saved her third husband, who was Jewish, from World War II concentration camps while earning a living writing for the Nazi-controlled press.

Seemingly every insult you can throw at Colette sticks. In spite — or maybe because — of that, she earned plaques that mark her passage all over France.
Read More